New Officer in Charge for City of Terrace RCMP Detachment 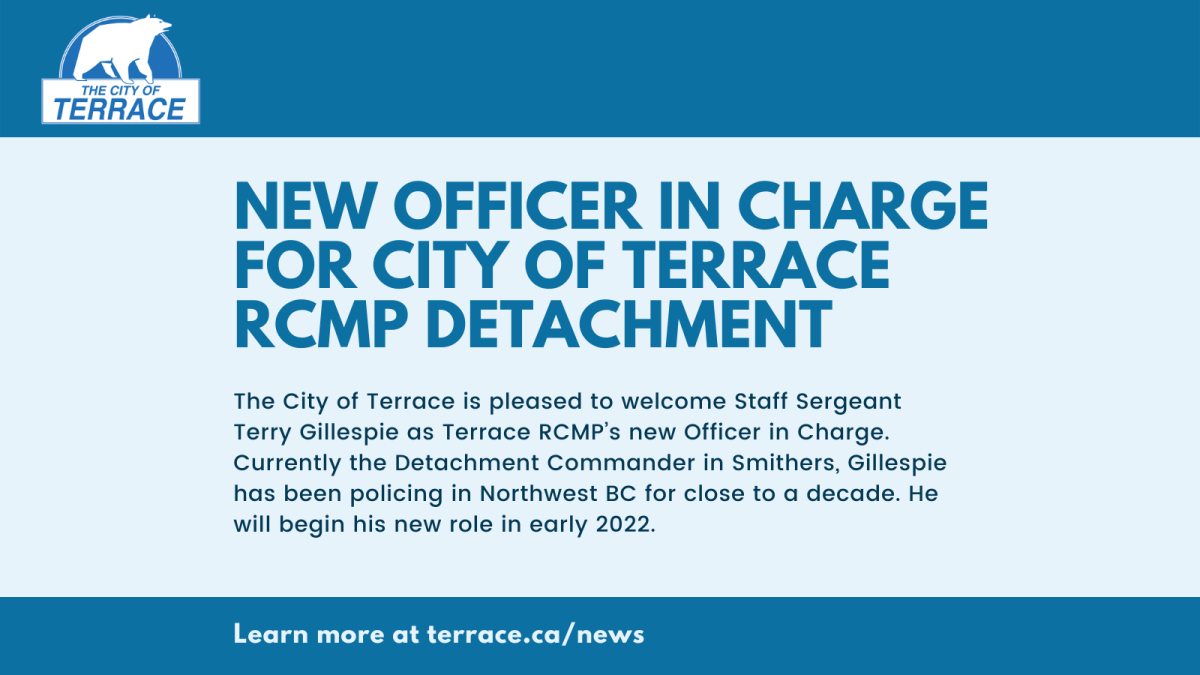 The City of Terrace is pleased to welcome Staff Sergeant Terry Gillespie as Terrace RCMP’s new Officer in Charge (OIC). Gillespie was appointed to the role after a nationwide search in collaboration with the RCMP and the City of Terrace. He will begin his new role in early 2022.

The OIC oversees both the operations and administration divisions at a detachment. Terrace has been without a permanent OIC since Inspector Jayson Lucash left this past summer. In the interim, S/Sgt. Mike Robinson acted in that role.

“I am very excited to be joining the team at the Terrace detachment. I know S/Sgt. Robinson has done a great job of advancing the detachment’s interests and look forward to building upon the work he has done while acting as the officer in charge. My family and I are looking forward to immersing ourselves into your wonderful community,” said Gillespie.

“I started my career in Squamish, which reminds me of the Terrace area by being nestled in the mountains. All of my RCMP service has been in uniform policing, and I am delighted to remain in a uniform role. I have been very fortunate to have been posted to detachments throughout my career with great indigenous communities and am looking forward to continuing to build relationships in Terrace,” Gillespie said.

“On behalf of the North District RCMP, I am so pleased that Staff Sergeant Terry Gillespie has been selected as the new Officer in Charge of the Terrace RCMP. Terry has demonstrated his strong leadership abilities through his experiences as the Chief of Police in both Queen Charlotte City and presently, Smithers. He is very community oriented and has excelled in his ability to build strong relationships with Indigenous communities. I am confident he will be a great fit for police leadership in Terrace and ready for the new challenges that he faces,” said Chief Superintendent Warren Brown, District Commander for the “E” Division North District.

“Staff Sergeant Gillespie will be a great fit in his new role at the Terrace detachment. He has shown commitment to the north and we are happy he is taking the next step in his career here in Terrace, where new opportunities and challenges in a larger detachment await. Strengthening public safety is a high priority for the City as well as our community and we are eager to continue to work with Terry on this. We look forward to welcoming him and his family to Terrace in the New Year. We would also like to extend our thanks to S/Sgt. Robinson for stepping up and leading the detachment as interim OIC over the past several months,” said Mayor Carol Leclerc.

Culture & Heritage
Our historic places, which include buildings, landscapes.

Discover Terrace
Learn about Terrace, the regional business centre for the area.

City Services
Services provided by The City of Terrace