The City of Terrace is located at the heart of Northwestern BC, supporting about 12,299 residents as well as those in the surrounding communities who work, play, and do business here. Indigenous peoples have inhabited this area of Northwest BC for thousands of years; the City of Terrace has a close relationship with the Kitselas and Kitsumkalum First Nations and acknowledges that our community exists on unceded Tsimshian territories. Terrace is the largest community in the Regional District of Kitimat-Stikine, which covers an area of 107,000 km² that also includes Kitimat, Stewart, Hazelton, and New Hazelton.

The City has a small-town atmosphere and encompasses a total land area of 5,958 hectares. This total land base is divided into two separate land parcels: 2,061 hectares makes up the City’s urban area while an additional 3,897 hectares, located south across the Skeena River, encompasses the Northwest Regional Airport and the Skeena Industrial Development Park lands.

As the service and supply centre for the region, Terrace is the location of choice for many businesses and entrepreneurs due to its close proximity to three deep water ports, rail service, and a bustling airport that serve to connect Terrace efficiently to the rest of the world. Terrace is approximately 550 air miles northwest of Vancouver.

The City’s urban area is located on a series of natural flat benches, or terraces (hence the name) within the broad Skeena River Valley. The region experiences a temperate coastal climate with warm summers and mild winters; the proximity to the ocean (approximately 60 km/37 mi), the low altitude (60 m/196 ft above sea level), and its location within the shelter of the Coast Mountains has created a natural “greenhouse” effect. Rainfall is less than half of that found on the coast and temperatures are warm enough to permit the growing of fruit orchards and specialty crops, including peaches, for those with a green thumb and some TLC.

Terrace offers year-round, family-friendly recreational opportunities including world-class fishing on the Skeena River, well-maintained hiking and cycling trails, a golf course at the base of a majestic mountain, and winter activities including downhill, cross-country, and back-country skiing. It is home to the largest farmers market in Northern BC and celebrates the rich heritage and culture of the region during the annual Riverboat Days festivities on the BC Day long weekend. 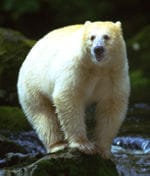 The Kermodei (pronounced kerr-MO-dee) is indeed a separate and distinct member of the black bear family (for you Latin buffs, that's Ursus americanus Kermodei). Kermodeis tend to be a bit larger and, of course, truly a bear of another colour, ranging from a light chestnut blond (or red) to a shade of steel blue-grey (which are also called glacier bears). They were first identified as a new and distinct species by the director of the BC Provincial Museum, Francis Kermode, in 1905. It took over 20 years before Dr. Kermode was able to obtain a live yearling cub to observe and study. From this work, he finally concluded (in 1928) that indeed the Kermodei was not an albino, but an extremely rare sub-species of the common North American black bear.

The Kermodeis generally average about 113–158 kg (250–350 lbs), although an occasional male may exceed 226 kg (500 lbs) Their body length averages 1.5–1.85 metres (5–6'), although when they stand on their hind legs, they would tower over most of us at 2.5–2.7 metres (8–9'), and are usually full-grown after four years. Their eyes are small; ears small and rounded; and they have an excellent sense of smell. Their natural diet is composed of wild fruits, berries, insects, small game, and salmon—in which they quite enjoy rolling when in a ripened stage. The female usually gives birth in late fall, with one or two cubs being common; the cubs stay with their mother until they are about a year-and-a-half. The cubs are sometimes black in colour.

The bears like the mountainous terrain, lush forest growth, mild climate, productive salmon streams, and rivers offered in the natural sanctuary around Terrace and on the small islands in the Douglas Channel. In the past, trophy hunters and headline seekers have reduced the small population of white Kermodeis. Now, strong Provincial protection regulations and enforcement, along with a prohibition on their killing, have helped stabilize their numbers. No one knows for sure how many Kermodeis live around the Terrace area today. Local residents have shown an increased interest and concern for the Kermodeis' well-being and preservation.

The City is proud of the Kermodei Bear that graces the City's official Corporate Seal. Its picture and silhouette can be seen on numerous signs, brochures, and vehicles around the municipality.

As with all wild creatures, bears must be treated with the utmost respect. Please keep your distance if you come upon a bear, and do not attempt to feed or approach them. Mothers are extremely protective of their cubs, and there should never be any move made towards the cubs. When in the wilds, ensure that you are heard so that you do not stumble upon wildlife.

For further information on bears and wildlife, please contact the Ministry of Environment. 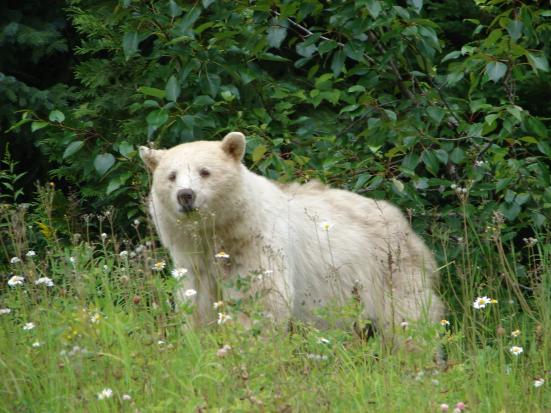