The City of Terrace acknowledges that we live, work, and play on the traditional homelands and unceded territory of the Tsimshian people. May we continue to work together to build our communities up through collaboration and understanding.

Terrace is located in northwest British Columbia, adjacent the Skeena River at the intersection of three valleys, the Skeena, Kitimat and Kitsumkalum. It derives its name from the glacial deposits that formed terraces or raised “benches” on which much of the City is situated.

Terrace and its surrounding lands are located in the traditional territories of the Tsimshian First Nation.  The Skeena River and the surrounding mountains dominate the landscape of the community.  The river, flowing generally east to west through the landscape, provided life sustaining resources and an important transportation route to local First Nations and early settlers from the Pacific coast to the interior.  Prior to the arrival of European settlers, the Tsimshian galts’ap’ (villages) of Kitsumkalum and Kitselas, located on the banks of the Skeena River just west and east of present day Terrace, were the dominant communities.

Terrace’s history dates back to the late 1800s when the first settlers, many travelling on the Skeena River in steam powered sternwheeler riverboats, arrived in the valley. George Little, Tom Thornhill and Ed Eby were among those early settlers to arrive on the banks of the Skeena at what would become Terrace. These early settlers were met by and received assistance from the local Tsimshian residents including the likes of Charles and Emma Nelson from Kitsumkalum. 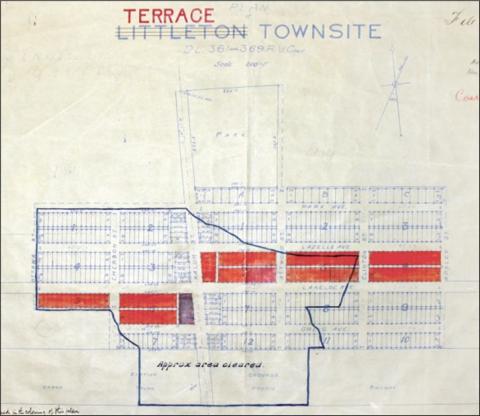 George Little, often thought of as the “founder” of Terrace, acquired 435 acres of land (District Lots 368, 369 and the south half of 361) between 1907 and 1911. This land makes up much of what is now downtown Terrace.  About this time the Grand Trunk Pacific Railway was beginning construction of a transcontinental railway through the valley. To help secure his vision of a town, Little offered the railway company free land if they would build their station in his proposed town. In 1912, Little had a town site surveyed and submitted the plan for registration proposing the community be named Littleton.  However, the name was apparently rejected because there was already a Littleton, Ontario and would cause confusion to the postal system.  Little would subsequently name his new community Terrace.

Prior to George Little, an Englishman, by the name of Tom Thornhill, would arrive in the area in 1892. He moved to the area from southern BC after marrying Eliza Wright, the sister of the Kitselas chief Walter Wright.  They would settle on the opposite bank of the Skeena River from Little.  Tom Thornhill is the namesake of the unincorporated community of Thornhill, east across the river from Terrace.

Thornhill’s Landing, just below the “Little” canyon on the Skeena, was a stopping point for the sternwheeler riverboats that travelled up the river. Here you can still find ringbolts anchored in the rocks at the river’s edge used to hold riverboats while waiting at Thornhill’s Landing. Like Thornhill, Ed Eby settled on the Skeena River but downstream about 4 miles at what was known as Kitsumkalum, just east of where the Kalum River flows into the Skeena.  Here in 1907, he staked land and established a riverboat landing that became known as Eby’s Landing.  Here Eby built a store and hotel and provided cordwood for the steam powered sternwheeler riverboats.  However, not long after with the completion of the Grand Trunk Pacific Railway in 1914, riverboats would be replaced by trains as the preferred transportation method for people and supplies.  With riverboats no longer stopping at Eby’s Landing, Terrace, with its railway station, would eventually become the dominant community in the valley.

Terrace would officially become incorporated as a village municipality on December 29, 1927.  In those early years sawmills and farming would dominate the economy. For a time, Terrace was known as the “Cedar Pole Capital of the World” providing cedar poles around the world for telephone and power poles.  It was also known as the “Northern Breadbasket” or “Okanagan North” for its fertile soils and mild northern climate which allowed it to grow a wide variety of fruits and vegetables and be the produce supplier to Prince Rupert and other communities of the north.

The establishment of Terrace as a WWII Canadian Military base in 1942 had significant impact on the community. Prior to the arrival of the Army and Air Force, Terrace was a village of about 400 residents.  The Army arrived first in 1942 bringing approximately 3000 soldiers and 3000 construction workers. The Royal Canadian Air Force would arrive in early 1943 and complete the construction of the airbase later that same year.  The arrival of all this military personnel had a profound effect on the community, changing it forever. The arrival of the military was a catalyst for a number of transforming projects including the construction of a highway west to Prince Rupert and east to Hazelton and modern municipal infrastructure projects such as a community water supply system.

In the 1950s and 60s Terrace continued to grow expanding its geographical boundaries becoming a District Municipality in 1959.  From the 1960s to the 1980s the community’s population grew with its economy driven largely by the forest industry but during this time it also began developing into a service centre for the northwest region of the province. Among the number of logging and sawmilling companies of this era were Columbia Cellulose, Pohle Lumber, Little, Haugland & Kerr (L.H. & K.), MacGillis & Gibbs and Skeena Forest Products.

During this time, recognizing the growth of Terrace the Province saw the need for improving health services and in 1961 opened the newly constructed 40 bed Mills Memorial Hospital replacing the 10 bed Red Cross Hospital that occupied the old army brigade headquarters on Little Avenue.  In 1987 Terrace changed its municipal status and became the City of Terrace.

Throughout the 1990s and early 2000s Terrace’s economy changed as the forest industry declined and lumber mills began to close.  With the advantage of an airport, and at the cross roads of the railway and highways to Prince Rupert and Kitimat, Terrace began to establish itself as the retail, government and services centre for the region.  Tourism, focusing on outdoor adventures and world class sports fishing opportunities, also became an important component of Terrace’s identity.

Today, Terrace remains predominantly a service centre with only one sawmill (Skeena Sawmills) still operating.  As it has done historically, Terrace continues to benefit from its strategic location.  Its service economy benefiting from its location between the container port in Prince Rupert and the aluminum smelter and liquefied natural gas export facilities in Kitimat.  While it continues to attract residence and outdoor enthusiasts seeking the adventure and opportunity found in the mountains and rivers that surround the community.